Pre-owned Fulltone OCD V2.  In like new condition, with original box.  This is the new, second version of the OCD with their new output buffer.  Excellent sounding pedal got a new facelife and sounds even better somehow!

The New Fulltone OCD V2
The OCD has received many slight tweaks over the last 12 years, often incorrectly identified as “version 2, Version 3, V4, etc.” In reality there has always been only one version…Version 1, with very slight variations after that making them V1.1 through V1.7.On 6/15/2017 we released a very new OCD, different enough that it warrants a V2 designation, an explanation and warrants a trip to your favorite dealer to give it another listen. Not a subtle change when turned on…not a subtle change when turned off (in E.B. mode).

NEW FEATURE output buffer (when pedal is turned on in True-Bypass mode, or always when in Enhanced Bypass mode) which eliminates it from being influenced by effects that came after it. Translation, your sound remains consistent regardless of placement in today’s more complex signal-chains, loopers, and pedalboards. This buffer also had a positive effect on the sound, it reduced loading on the pedal’s hard-clipping stage, allowing more sustain of both the sound and the overtones.

NEW FEATURE Internal switch to choose between ”Enhanced Bypass TM” & True-Bypass, and with no popping sound in either mode. No other company offers EB…I invented it. 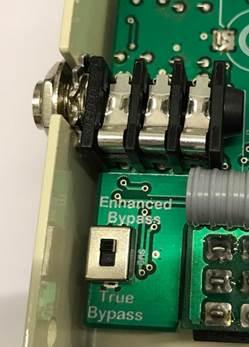 A downside to True-Bypass:
True-Bypass (TB) switching was the ultimate way to achieve a clean signal path for many years. Everything’s different now, most guitarists have elaborate pedalboards with 10 or more pedals being the norm, and tremendous potential for signal and tone loss with the many cables, connectors, and other pedals involved in the chain. There can be so much signal loss that it sounds nothing like the sound of a guitar with a cable straight into the front of a great tube amp. Uninspiring.

What’s the benefit to unity-gain FET buffered bypass?
It reduces the loading effect that occurs using long lengths of cable, and you remove the loud “popping” sound when switching the device on and off.

What’s the issue with unity-gain FET buffered bypass?
Although my ears always told me that it sounded “tinny” and that there was signal loss, with the help of a my favorite Electronic Engineer (using some very expensive test equipment) we recently documented that each unity-gain FET buffer actually cuts the gain somewhere between 0.3 to 0.6 dB. This loss of gain is in the low-Mids and Bass frequencies, resulting in that “tinny” sound now that the highs remained and some of the bass and mids are gone. Now factor in that there are two FETs per pedal required to couple the IN & OUT path, that’s an obvious loss of between 1dB-2dB per pedal.

What’s an even bigger issue with this old style unity-gain FET bypass?
It kills dynamic pick response, i.e. it kills the difference between picking soft and picking hard…Yes, when the pedal is in bypass! This to me is a deal-breaker, and while I’ve always felt this to be the case, it’s great to be able to actually see it on the scope.

What’s the solution?
Enhanced Bypass! Configuring both of the switching FET’s Class-A! By configuring a FET for gain (also referred to as wiring it “Class-A“) all the dynamics return (and then some), even if you only configure it with the slightest amount of gain, in this case: 0.3 to .06 dB.

People rave about old EP-3 Echoplexes and Ep-3 type boosters, and although they know that they love what it does to the guitar’s sound, they can’t explain why. It’s because of the Class-A FET preamp! With a Class A FET the dynamics get amplified, allowing an even greater range of expression than if you were playing through a guitar and just one cable straight into your amp. The downside with EP-3 preamps is that they throw the signal OUT-of-phase, boost treble, and cut bass. Fulltone’s EB the signal exits the pedal IN-phase and doesn’t change the EQ at all.

With OCD V2’s Enhanced Bypass you get this benefit whether the pedal is turned ON or OFF.
This means that just having the OCD turned off in your signal chain makes the whole rig sound alive, fresh, and more powerful again.

VISUALLY
V2 has slightly smaller “OCD” and “Fulltone” logos, along with “Built in the USA” under the Fulltone logo. All Fulltone products are built in the USA, the V2 now says it. Make no mistake, nothing Fulltone is made outside the USA, but please know ALL resistors, knobs, pots, capacitors, switches, etc. for EVERY product in the world are made overseas! And because of that, legally you have to say "Built in USA" instead of "Made in USA."

Next, the IN & OUT jacks are placed exactly at the halfway point of the left & right sides on V2, whereas with all previous versions the jacks were located more towards the bottom.

Looking at the V2 display box you can see the larger decal and addition of “With internally selectable “True-Bypass” or “Enhanced Bypass.”

SOUNDWISE?
The stages added to the circuit changed the OCD, there’s no doubt, but it changed for the better. Words some people used to use to describe the OCD: “brash,”--“scooped sounding,”--“Bassy,”--“lacks sustain,”-- “too affected by other pedals”….NO LONGER APPLY.